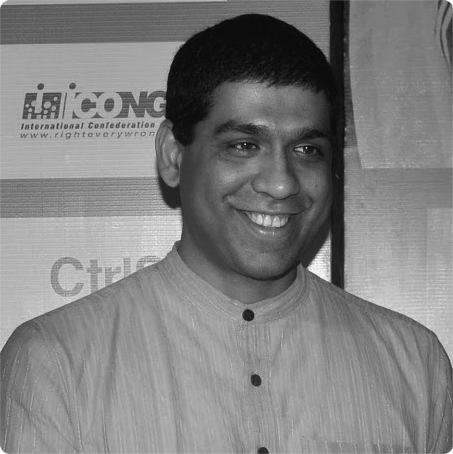 At an age when most children begin to spin dreams of their career, Jeroninio (Jerry) Almeida had already begun to walk on the path of his ambition. For someone who began training and mentoring people at the age of 17, it was the belief of creating a more responsible and humane society, and a better world for all that motivated him to become a management consultant and leadership coach.

As a missionary entrepreneur, Jerry founded iCONGO International Federation of NGOs and has championed fundraising campaigns and awareness generating social movements, and these fundraising movements have been significant in changing the overall attitude towards fundraising, philanthropy and social justice in India.

The KarmaVeer Puraskaar Awards were established in 2004 by Jerry , founder of ICONGO who felt , that there should be an awards ceremony to recognise the hard work and positive impact that social workers have on the lives of vulnerable children, families and adults.The aim of the KVP Awards is to recognize and inspire individual citizen social responsibility, justice' and action initiatives. Jerry has been profiled by the electronic media for his outstanding work on iCONGO. His Mantra is Together as ONE we can RIGHT every WRONG and experience the priceless Joy of Giving

He has created and led several initiatives to create social, political, cultural and economic reformation programmes in India. Jerry also sowed the seeds for electoral reforms and the fight against corruption in India with the UN and was the architect of the ‘reclaim people power’ and ‘no criminals’ campaigns during the past two national and state elections in India.

Jerry inherently believes there is a Hero in every heart and aims to help people discover the huge potential within them to be heroes, leaders, volunteers & champions of change. He is an eminent and celebrated Inspirational Orator/ Motivational Speaker, internationally certified and revered Leadership Specialist/ Trainer and Life/ Executive Coach maverick.

He is the Best-selling Author of the “Karma Kurry” – Bestseller Book series, which has a foreword by Mr. Nelson Mandela. Karma Kurry for the Mind, Body, Heart & Soul is a decade-long journey of discovering soul-stirring narratives that celebrate the triumph of the human spirit.

In this energizing book Jerry brings together enthralling life stories of KarmaVeer Award Recipients. The compelling stories in this book are of ordinary citizens who have unleashed the spirit within, with extraordinary consequences, radically changing society for the better. Their ideas for action and their stories will inspire you at a profound level. They are everyday women and men who have taken their defeats and adversities and turned them into laudable actions for transformation. Every human has a hero within; a courageous, compassionate being who has the power to create a better, more humane world.

It is better to light a Candle then curse the darkness

Partners over the years